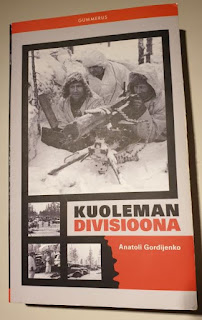 The Winter War between Finland and Soviet Union in 1939-1940 lasted for 105 days. It was hard and bitter fighting in freezing cold. Soviet Union official history does want to forget it due to their Phyrric victory. And mostly they remember the great patriotic war (WW2 against Germany)

Still there is some books in Russia written about winter war from ordinary infantry man point of view. This book is called Division of death. It's written by Anatoli Gordijenko and it's based on N.I. Klimonov's diaries. He did serve in 18th infantry division

18th division attacked to Finland, but it was encircled at Lemetti area. After that encirclements continued and was divided to 9 different rings. After that started 3 months long bitter fighting in -40 degrees celsius. Finns did have superior tactics but lack of materials and russians did have artillery, tanks etc... But they were stuck and their planning and leadership was quite incompetent. 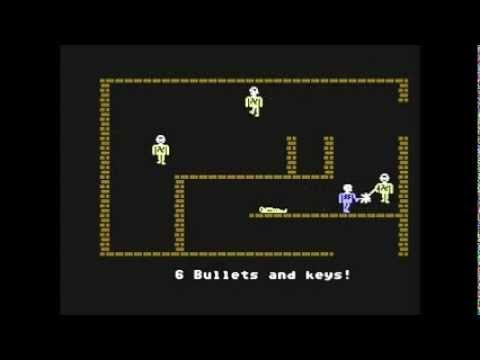 There is huge amount of WW2 FPS games. Most famous series are Battlefield, Medal of honor, Call of Duty, Wolfenstein, Brothers in arms and many others. Some of them are more arcade type like COD and some more realistic or tactical like BF. So your choice of game depends which kind of type of playing you like.


Then Wolfenstein 3D was released in 1992, and it did set the foundation for all upcoming FPS games for years.
Wolfenstein 3D

Of course nowadays games are totally in another level with realism and graphics. And game series usually also go to another historical areas like WW1, Vietnam war or in future with Star Wars type of games. But it seems that it goes in cycles and they always return to WW2. Like latest BF V in 2018 or COD WW2 2017.

Nowadays my absolute favor is Battlefield 1.


If you play FPS games, this one you have to test and have fun! 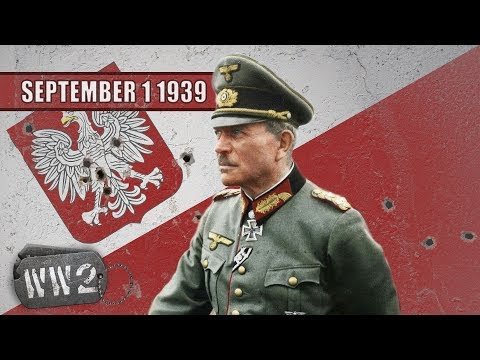 If you don’t have time to read, and you favor documentary series or movies. There are few very good and comprehensive documentaries that you can find from YouTube. It is good to check these and enjoy very well produced material.

This channel will cover events of WW2 in real time for next 6 years. Really good series so far already, it concentrates on facts and do not take any sides. Indy is so good host and presenting things in very interesting manner. All episodes are about 10 min long and really easy to follow. This is also suitable for those who don’t have 2-3hours for one session to check.

Check it, one of the best documentary series on WW2 for sure. 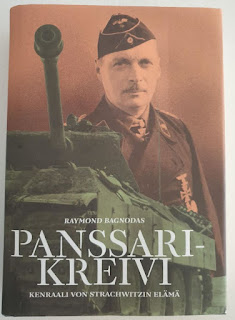 The Panzer Count, Devil itself

If you check WW2 Panzer Ace statistics, you can find out how those are dominated by German soldiers. Names like Kurt Knispel, Otto Carius and Michael Wittman, their tank kill records on scale 138 – 168. Soviet union aces have records up to 52 and other allies like USA's Lafayette Green Pool with 12 tank kills.

Of course statics are always not 100% accurate, but they give understanding of scale anyway.

You can't find Panzer Count Strachwitz on those lists. He did never keep count on tank kills. But it has been estimated between 150-200. Which makes him one of the most successful tank commanders ever. He was one the 27 men from whole German army, who was decorated with Knight's Cross of the Iron Cross with Oak Leaves, Swords and Diamonds. He participated battles on Stalingrad, Kursk, Kharkov and etc.. He did earn his legendary reputation leading his men on the front and he was wounded 14 times. 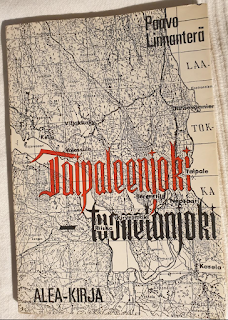 River of Taipale - River of death

Winter war 1939 - 1940 between Finland and Soviet union, was really bitter fighting in freezing cold. River Taipale was part of the Mannerheim line.

This book is written by Paavo Linnanterä, he was head of the company, they were part of the 10th division 1/JR. He is using his own and company wartime diaries. He is giving his first hand view what did happen in trenches of Taipale. Battles were extremely brutal, savage and ferocious.

Quota from 1 day of the week, that they did call Hells week. 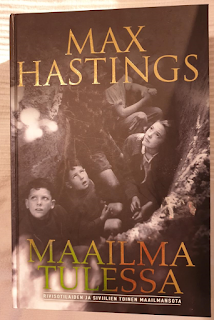 Max Hasting has born to write about war history and he have done so last 35 years. This might be his best book and same time one the best books ever written about WW2 history.

Book includes tons of facts with insterestings statistics. Hasting has really studied casulties, weapons, production figures and etc... He explains politics, war strategies of different countries and explain how things did happen. Same time he tells stories of invidual human's in the middle of this hell. This books show's really the big picture of WW2 including all view points. By that way he can make history fact book with novel book structure, really interesting way to present things.

Max Hastings does not stand on anyone's side, he draws complete picture. Book explains how major battles and war efforts were made in eastern front, that western allies war efforts were much smaller than Germans and Sovie…
Post a Comment
Read more 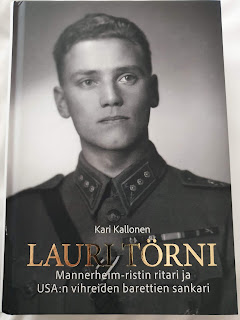 Larry is most known Finnish war hero and Green beret legend. He fought as officer under 3 different armies. He has been part of Finnish army, Waffen SS, Wehrmacht and USA Green berets. He did fought in Finnish army in Winter war and in Continuation war againts Soviet union in WW2. Finnish president Mauno Koivisto was part of Törni's jaegers in continuation war. Soviet army placed bounty on his head of 3 million marks. He also did fought against Soviet union as part of Wehrmacht in last months of WW2.

After WW2 he did continue his military career in USA Green berets and he did took part of Vietnam war. Larry was known as dedicated and fearless soldier with swift battle tactics.
There are many books about him, and also some Hollywood movies are done based on his legendary career as Green beret.

Unknown Soldier
I'am almost 50 years old boring IT engineer. I have been reading WW2 related history books since I was 10 years old. My first book was Unknown Soldier by Väinö Linna. Since then I have read WW2 history including politics, military strategies, fictional stories, biographies and some other war books about French foreign legion, mercenaries and conflicts. I have ~165 book library and I have read several hundreds of books in this subject. In this blog I will present and recommend best books in this area. I'am not any certified historian. This is just my hobby. And who ever share the same interest, hope that you can find some good books to read from my recommendations.

Check out documentary Soviet Story. UK and USA were allies in WW2 with these guys. What else i need to say!! https://en.wikipedia.org/wiki/The_Soviet_Story